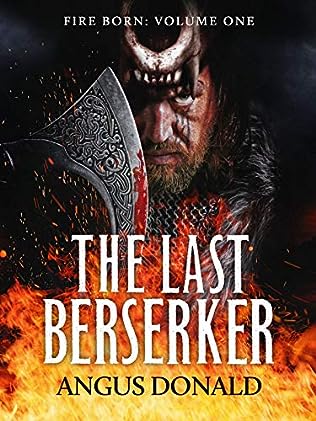 The greatest warriors are forged in the flames

Bjarki Bloodhand and Tor Hildarsdottir are journeying south into Saxony. Their destination is the Irminsul, the One Tree that links the Nine Worlds of the Middle-Realm. In this most holy place, they hope to learn how to summon their animal spirits so they can enter the ranks of the legendary berserkir: the elite frenzied fighters of the North.

Karolus, newly crowned King of the Franks, has a thorn in his side: the warlike Saxon tribes on his northern borders who shun the teachings of Jesus Christ, blasphemously continuing to worship their pagan gods.

An epic battle for the soul of the North

The West’s greatest warlord vows to stamp out his neighbours’ superstitions and bring the light of the True Faith to the Northmen – at the point of a sword. It will fall to Bjarki, Tor and the men and women of Saxony to resist him in a struggle for the fate of all Europe.

Vikings… The north, the cold… and blood soaked battles… what more could you want? … Angus Donalds new series does contain all those elements, but its also a lot more. This is a story about the growth and youth of Bjarki and Tor, and their submersion into the mysteries of the north.

The Story begins with a bloodsoaked madman single handedly destroying a village, before dropping back in time to Bjarki’s neck in the hangmans noose, saved at the last by a wandering trader, and taken to the heart of the northern world to learn the ways of the warrior, His companions on this Journey Valtyr far Wanderer and Tor Hildarsdottir teaching him weapons, fighting, but more than that, they teach him about family something he knows little about having been a foundling, his parents dead, raised by the villager who lost the lottery, he has been seen as a nuisance all his life. Now someone can see something else in him, the potential, even if that potential is death and destruction.

Angus Donald is best known for his stunning Robin Hood Series, so this is a departure to something new but retaining his wonderful character driven plots, his unique style and humour comes across in the tale, and the adventure he imbues into all his tales shines through.

I personally love a book filled with blood soaked battles, and this book has that, but it has so much more, it explores the root of the Northman’s religion, the blossoming of the Christian faith through that Northman’s eye and we see the growth of friendship and family when experienced by someone who has never know it. From the simplistic rustic life in a poor Northman’s village to the dazzling wealth of the Royal Frankish court, this story is both broad in scope and intimate in emotion, I devoured the book, and have been left wanting more and more. 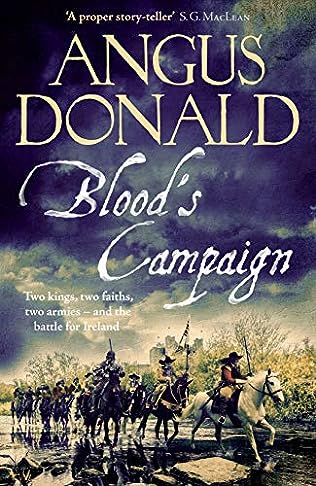 In the theatre of war there can only be one victor….

The English Army is besieging Carrickfergus in Ireland. Brilliant but unusual gunner Holcroft Blood of the Royal Train of Artillery is ready to unleash his cannons on the rebellious forces of deposed Catholic monarch James II. But this is more than war for Captain Blood; a lust for private vengeance burns within him.

French intelligence agent Henri d’Erloncourt has come across the seas to foment rebellion against William of Orange, the newly installed Dutch ruler of England, Scotland and Ireland. But Henri’s true mission is not to aid the suffering of the Irish but to serve the interests of his master, Louis le Grand.

Michael ‘Galloping’ Hogan, brigand, boozer and despoiler of Protestant farms, strives to defend his native land – and make a little profit on the side. But when he takes the Frenchman’s gold, he suspects deep in his freedom-loving heart that he has merely swapped one foreign overlord for another.

On the banks of the River Boyne, on a fateful, scorching hot day, two armies clash in bloody battle – Protestant against Catholic – in an epic struggle for mastery of Ireland. And, when the slaughter is over and the smoke finally clears, for these three men, nothing will ever be the same again….

Ive been a fan of Angus Donald since i got my hands on a little paperback 10 years ago called “Outlaw”, it was the beginning of something totally new, a total rewrite of the Robin Hood Legend, a robin hood meets the godfather, and when it ended after 8 amazing tales i really wondered if he could top it as a series, and for me he did, the beginning of the Holcroft Blood series “Bloods Game” was something truly different because while it followed the norm of taking a hero from childhood to adulthood, it did so with a boy that was different, Angus introduced us to Holcroft Blood a boy who lived with Autism, something they would not have known back then, but surely existed, it took a boy on the ride through dangerous politics and Machiavellian plots, where those around him could consider him to be too simple to understand due to his lack of social skills, but under that quiet exterior lurked a highly intelligent, boy then young man.

Bloods Campaign finds Holcroft a grown man, with his beloved Artillery regiment, an officer and a gentleman of some skill, as always he is front on centre in the action and mired in a personal battle with his nemesis Henri d’Erloncourt a french officer and spy, and the battle for Ireland.

Angus Donald writes in a style that is very character driven and has a talent for introducing lots of well rounded and fun side characters, like Enoch the aged artillery man, and in this book Hogan an Irishman, a brigand and an all round chancer, but one with his own moral code and skills, I love a good side character, and loved the addition of Hogan, a man who could star easily in his own book. We travel the length and breadth of Ireland galloping over bogs and rivers, there are sieges and battles, there are sneak attacks, betrayals, spies, bravery, stupidity in action and so much more. I tore through this book in a single day, so far this is easily my favorite book that Angus Donald has written, a total adventure from first page to last, with some beautiful scenes and scenery. My Favorite is the meeting near the end between Holcroft and the man who is alleged to have cuckolded him, so well written and so beautifully showing the growth of Holcroft from the start of the book to the end.

I highly recommend this book, and all of Angus Donalds books

Angus Donald was born in China in 1965 and educated at Marlborough College and Edinburgh University.

He has worked as a fruit-picker in Greece, a waiter in New York and as an anthropologist studying magic and witchcraft in Indonesia.

For the past 20 years, he has been a journalist in Hong Kong, India, Afghanistan and London. 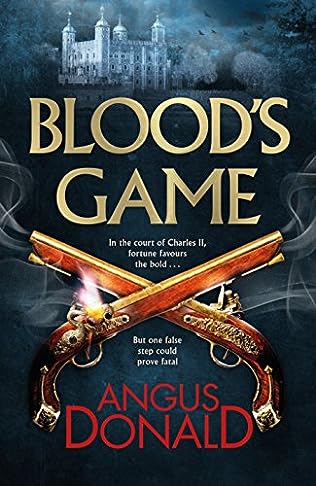 THE THRILLING NEW SERIES FROM THE BESTSELLING AUTHOR OF THE ‘OUTLAW CHRONICLES’. PERFECT FOR FANS OF BERNARD CORNWELL AND CONN IGGULDEN. AFTER THE TUDORS CAME THE STUARTS . . . London, Winter 1670. Holcroft Blood has entered the employ of the Duke of Buckingham, one of the most powerful men in the kingdom after the king. It is here that his education really begins. With a gift for numbers and decoding ciphers, Holcroft soon proves invaluable to the Duke, but when he’s pushed into a betrayal he risks everything for revenge. His father, Colonel Thomas Blood, has fallen on hard times. A man used to fighting, he lives by his wits and survives by whatever means necessary. When he’s asked to commit treason by stealing the crown jewels, he puts himself and his family in a dangerous situation – one that may end at the gallows. As the machinations of powerful men plot to secure the country’s future, both father and son must learn what it is to survive in a more dangerous battlefield than war – the court of King Charles II.

Angus Donald has managed over the last 8 years to provide us with one of the best modern retelling’s of Robin Hood that you could ever possibly want to read. When it finished what would come next?

Colonel Blood is not an unknown character to me, but he is very much a little known enigma for many readers…..

So how would Angus bring this man alive?

The answer is through his own trials and those of his family and the daring theft of the Crown Jewels. The key character for me in this book is his son Holcroft Blood. Angus Donald brings to life the time period and the people, the nasty conniving Buckingham with his privilege and power, a spoiled king and various sections of society from the theater to the slums of London. While Angus tells the history lightly, he also manages to weave the reader right into the immediate so you feel part of the story not a voyeur in a tale.

By the end of the story Holcroft Blood has become a new fav character, a young man different from his peers, but gifted and talented in many ways, with an honour that leads him into some strange situations. His friend Jack Churchill and he bring the story to a very satisfying and tense conclusion, in a book with action and humour aplenty, setting the scene for what i feel will be a truly excellent series in the future…. book two cannot come soon enough for me.