Bernard Cornwell was born in London in 1944 – a ‘warbaby’ – whose father was a Canadian airman and mother in Britain’s Women’s Auxiliary Air Force.

He was adopted by a family in Essex who belonged to a religious sect called the Peculiar People (and they were), but escaped to London University and, after a stint as a teacher, he joined BBC Television where he worked for the next 10 years.

He began as a researcher on the Nationwide programme and ended as Head of Current Affairs Television for the BBC in Northern Ireland. It was while working in Belfast that he met Judy, a visiting American, and fell in love. Judy was unable to move to Britain for family reasons so Bernard went to the States where he was refused a Green Card. He decided to earn a living by writing, a job that did not need a permit from the US government – and for some years he had been wanting to write the adventures of a British soldier in the Napoleonic wars – and so the Sharpe series was born. Bernard and Judy married in 1980, are still married, still live in the States and he is still writing Sharpe. 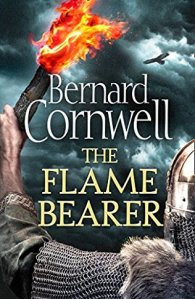 The brand new novel in Bernard Cornwell’s number one bestselling series on the making of England and the fate of his great hero, Uhtred of Bebbanburg.

BBC2’s major TV show THE LAST KINGDOM is based on the first two books in the series.

From the day it was stolen from me I had dreamed of recapturing Bebbanburg. The great fort was built on a rock that was almost an island, it was massive, it could only be approached on land by a single narrow track – and it was mine.

Britain is in a state of uneasy peace. Northumbria’s Viking ruler, Sigtryggr, and Mercia’s Saxon Queen Aethelflaed have agreed a truce. And so England’s greatest warrior, Uhtred of Bebbanburg, at last has the chance to take back the home his traitorous uncle stole from him so many years ago – and which his scheming cousin still occupies.

But fate is inexorable and the enemies Uhtred has made and the oaths he has sworn combine to distract him from his dream of recapturing Bebbanburg. New enemies enter into the fight for England’s kingdoms: the redoubtable Constantin of Scotland seizes an opportunity for conquest and leads his armies south. Britain’s precarious peace threatens to turn into a war of annihilation.

But Uhtred is determined that nothing, neither the new enemies nor the old foes who combine against him, will keep him from his birthright. He is the Lord of Bebbanburg, but he will need all the skills he has learned in a lifetime of war to make his dream come true.

In 2013 i decided i wasn’t going to read the next Uhtred book, i would take a break, so when Flame Bearer landed with me i thought i might be time to play catch up, and see if the gap had made the books any fresher

I’m happy to say that after the gap Uhtred did seem fresh again, that jaded feeling i also got by the tail end of Sharpe had gone, probably due to the semi superhuman quality of the lead characters who cannot die.

As always these 4 new books had that sharp, fast paced action, that hard nosed action that you expect from our pagan Saxon. The plots of each story twisted around and away from many expected directions keeping me guessing just what it was that Uhtred had divined from the enemies dispositions and actions. The complexity of him as a Saxon with an inner Dane has always led to action that cant be predicted, his morals of not killing Women and children despite the trouble it would cause him, but always divining a way out, his utter irreverence towards Christianity and its corrupt priests and yet his respect for the truly pious ones. Uhtred is so truly complex you cannot predict how Bernard Cornwell will use him.

That said i still had the age old gripe….. either take Bebbanburg or shut up about it, by Flame Bearer if he didn’t take the dammed place i was going to take his seax and finish him.

I shan’t spoil the result of the book or say if i will read any more. but i will say that the while the action is there in Flame Bearer and the twisted machinations, that TBH, Mr Cornwell rubs in your face this time, the book had a more somber edge.

So much hinged on so many wild ass guesses by Uhtred and the result of failure was clearly spelled out for the reader, this caused quite a bit of reflection from the war leader, quite a lot of uncertainty, compared to his usual screw the outcome approach. This i felt took from the all out action but made it a better more emotive book.

This was in addition to the more complex Uhtred that Cornwell seems to have created with his familial relationships, and the alleged bastard son of Edward. It seems i took a break just when the series got really interesting.

Do i recommend…. yes… but only because i came with a fresh eye, it raised my enjoyment levels.