James Benmore studied literature at the Open University and has since completed an MSt in Creative Writing at Oxford University. He won the AM Heath prize in 2010 for best work of fiction by a writer graduating from Kellogg College. His short stories have been published in various anthologies. He lives in London 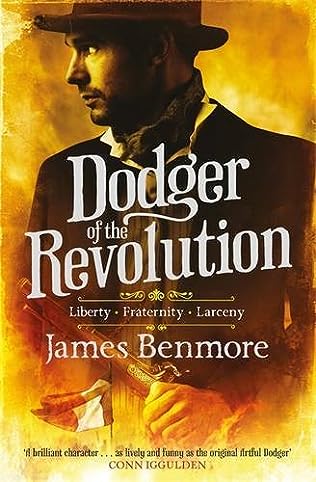 The Artful Dodger faces his most dangerous adventure yet as he leaves Dickensian London and finds himself manning the barricades in defence of liberty, fraternity and larceny in the 1848 Paris uprising.

For Dodger, life as a criminal kingpin is losing its allure. Leading a gang of petty thieves from the Seven Dials is not as easy as Fagin made it look and after a year in charge Jack Dawkins has been reduced to a shadow of the man who used to be the envy of every pickpocket in London. Opium-addicted and heavy-fingered, Dodger is fast becoming a laughing stock on his own patch until a chance encounter leads him to Paris and a job like nothing he’s had before.

In a city alive with rebellion, Dodger must avoid assassins, jilted lovers and revolutionaries, and rediscover his touch if he is to lift his most precious treasure yet.

The third in the James Benmore’s acclaimed series continuing the story of the Artful Dodger, this book confirms Jack Dawkins as one of the great fiction characters.

Dodger is back…. i always enjoy his return. Book 3 in the series, a series which has always been an unexpected delight. This time our slippery “Ne’er-do-well” is not the power house of charming crime we have seen in the past. His life has caught up to him in the form of Opium. An addict heading for an early grave if not for some help, which arrives in the form of personal loss and some desperate French citizens.

The need from these desperate continentals takes Dodger to France and away from his addiction, into the mouth of revolution. James Benmore takes not one but two classics on in this book, as he combines into the tales of Dodger… the descendants of another well known family … see if you pick up the book and whom.

As always with this series this is a fast ride, many great characters written in such a fast engaging style. The light-hearted tone that carried us through the last two books is still there but wrapped around a much more serious plot of addiction and revolution. James Benmore nails the right tone with this book, and as ever sets up a breathless final escapade that has you clinging to the edge of the page until the end.

a series not to be missed

James Benmore was born in Kent and currently lives in South-East London. He studied literature at the Open University and has since completed an Mst in Creative Writing from Oxford University.

A prolific short story writer, his short fiction has been published in various anthologies, including All These Little Worlds published by The Fiction Desk and The Failed Novelist’s Anthology 2011. These have received positive reviews from magazines such as Cherwell’s.

Dodger of the Dials  is his second novel.

Two years on from the events of Dodger, Jack Dawkins is back as top-sawyer with his own gang of petty thieves from Seven Dials. But crime in London has become a serious business – and when Jack needs protection he soon finds himself out of his depth and facing the gallows for murder.

2013 saw in my (humble) opinion a very daring debut novel, in the form of James Benmore and Dodger ( Review ) . To take on writing the continuing saga of characters originally penned by Charles Dickens had a confidence that bordered either a deep love of the subject or  insanity. Thankfully it was the former and for me the book was a real triumph.

2014 see’s the next step and probably the hardest one, i have heard from a fair few writers that the second book is the hardest, you need to make sure book one isn’t a flash in the pan, you need to grow as a writer, add everything you have learned and come up with a new interesting, credible second idea/ plot. Did he succeed?

Well given i don’t review books i don’t like, damn right he did! But more than that, he did it in style. Dodger of the Dials blows its predecessor away, it retains the audacity of characters and brings even more of the original cast of Dickens Oliver Twist back to life. More importantly it brings growth to the cast, a development of Jack Dawkins (The artful Dodger) it brings Oliver twist himself back, an older grown up more mature Oliver Twist, the meeting of these two old acquaintances is something to behold, emotive, cathartic and inspired.

There are many parts to this book, the crimes, the underworld, the gangs and their Sawyers (leaders), but the real triumph for me was the time spent in Newgate Prison. You could feel the age of the stone, the despair of the men due to hang, the desperation of the inmates. That tempered with the ever present devil may care always optimistic outlook of Jack gave s conflicting yet perfect synchronicity to the time spent there. I was taken from truly humorous moments to cuffing away a tear for the loss of a brave man (that’s me not giving away the plot) .

How James Benmore has managed to mix Dickensian England  and characters with a modern humour and outlook on the world and retain that feeling of the original is a marvel. I wish him all speed to his pen for book three because i’m already desperate to get my hands on it.