Julian Stockwin was sent at the age of fourteen to Indefatigable, a tough sea-training school. He joined the Royal Navy at fifteen before transferring to the Royal Australian Navy, where he served for eight years in the Far East, Antarctic waters and the South Seas. In Vietnam he saw active service in a carrier task force.

After leaving the Navy (rated Petty Officer), Julian practiced as an educational psychologist. He lived for some time in Hong Kong, where he was commissioned into the Royal Naval Reserve. He was awarded the MBE and retired with the rank of Lieutenant Commander. He now lives in Devon with his wife Kathy. 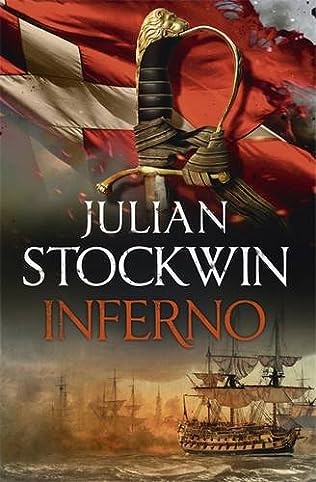 Inferno by Julian Stockwin, published by Hodder & Stoughton, out now

It’s 1807. Captain Sir Thomas Kydd’s famous sea action aboard Tyger has snatched his reputation from ignominy. He is the hero of the hour. But though Britain’s navy remains imperious, a succession of battles has seen Napoleon victorious on mainland Europe.

In an attempt to prevent the French from taking control of Denmark’s navy, Kydd’s great friend, Nicholas Renzi – now Lord Farndon – is sent on a desperate diplomatic mission to persuade the Danes to give up their fleet to Britain. But the Danes are caught between two implacable forces and will not yield, opting instead for the inferno of battle….

1)  for those who are new to the series, what are the roots/ origins for you and the Kydd story, how did you come up with the concept?

Once upon a time, not so very long ago, I was a software designer. I’d just signed off on my biggest and most fraught project. As I sank into an armchair, my wife Kathy thrust a large tumbler of whisky into my hand and looked me straight in the eyes. ‘Sweetheart,’ she said, ‘get a life!’ Her suggestion: that I write. And about the sea…

Once I’d overcome the initial shock and decided to give it a go, I realised there was a lot of sense in what she said. As far back as I can remember, I’ve been bewitched by the sea. Going to a decent grammar school was wasted on me; on the school bus I’d gaze out across the Channel at the low, grey shapes slipping away over the horizon on voyages to who knows where, taking my imagination with them.

My father thought he’d knock all this nonsense out of me, and sent me to a tough sea-training school at the tender age of 14. It didn’t work; there was no contest – Latin and algebra or splicing and boat handling.

But to achieve that more prominent role for the sea, it seemed logical to take the perspective of the men who actually did the job out there on the yardarm, serving the great cannon or crowding aboard an enemy deck, rather than of those shouting orders from behind. So the lower deck it was – and then I came across some surprising statistics. Unlike the army, where commissions were bought, all naval officers had to qualify professionally, and scattered among these were no more than a couple of hundred common seamen who made the awesome journey from the fo’c’sle to the quarterdeck, thereby turning themselves into gentlemen. Some became captains of their own ships; remarkably, some victims of the press-gang even became admirals. How could it be so? Just what kind of men were they?

2) The first few books have an almost sea shanty lyrical nature, how hard was this to write, and was it always due to vanish as Kydd matured?

Writing is never easy but as I’ve already mentioned I wanted the early books to have the voice of the lower deck. Once Kydd became an officer his speech patterns of necessity changed but I do enjoy having him lapse into the colourful lingo of Jack Tar on the odd occasion.

A hard question! There are many minor characters to whom I’m particularly attached. I think of Joe Bowyer, Kydd’s ‘sea-daddy’; Toby Stirk, gunner’s mate; Tysoe, Kydd’s devoted valet. I also have a soft spot for Kitty, the gritty Portsmouth seamstress and young Bowden, who conquers his shyness to become a fine officer. Kydd, of course, is the central character of the series and I feel I know him so well by now. He’s come up the hard way and is ‘true north’; personal traits that I deeply admire. And Renzi – such an enigmatic character initially, but he’s grown with the series.  I’d love to meet him and debate his philosophy. As an aside, Kathy always says I’m half Kydd, half Renzi!

4) Kydd has managed to be involved in most of the epic naval situations of his generation, to what age can he continue?

Well, some naval officers served for many decades. Collingwood chalked up 50 years’ service; Black Dick Howe spent 60 years as a professional sea officer. Once an officer makes admiral he is in post until he dies.

5) Details of book 18 Persephone already exist, are you already that far ahead of the reader?

PERSEPHONE will soon be finished in first draft and the final version will be delivered to my publisher at the crack of the New Year for publication mid-May.  Outlines for several following books are done and I am looking forward to the publication of two Kydd titles a year from next year.

6) You have started to intersperse your work with some stand alone books, do you have another stand alone planned?

I have a couple of ideas for further such novels but they are on a backburner at the moment so that I can concentrate on the new publication schedule for the Kydd titles. I certainly do plan to write more standalones in the future, however, as I find this a challenging and interesting diversion from my sea tales.

Not much spare time at the moment! However I do enjoy salty reminisences and have recently dipped into several of these. And any cat books are a treat and something completely different from my daily fare. I’m a big fan of Street Cat Bob!

8) Who are the writers that you grew up with and made you want to write?

I grew up enthralled with C S Forester, the only writer in the genre at that time, but was also captivated by the atmosphere in R M Ballantyne (‘Coral Island’) and found Marryat hard going for a small boy, but rewarding. The most evocative sea books to me were Conrad, which I now realise were written by someone who was a professional seaman who deeply related to the sea’s mystery. At sea I read all I could lay hands on that could amplify my experience. And while I was at sea C S Forester died, and I recall the deep sense of finality that I felt that there would be no more great sea stories of the kind he pioneered so masterfully. I have a deep admiration for Patrick O’Brian, and thoroughly enjoy his work, but of course we necessarily write from different perspectives. But it wasn’t one of these who was responsible for my becoming an author – it was my wife Kathy, as I’ve mentioned, who suggested I try my hand at writing.

9) After 18 books do you still have to do lots of research?

Perhaps not as much as when I first started writing but each new book brings with it a requirement for pretty intensive research – primary and secondary sources – and of course location research.

10) So fun questions time: you can invite any 4 people from the whole of history to dinner… whim and why?

Ah, only four! Well, my guests would be two men and two women: Horatio Nelson (my all-time naval hero);  Shakespeare (for his sheer mastery of the English language); Hester Stanhope (one of those fascinating Georgian ladies who relished their independence) and Helen of Troy (to see just how beautiful she really was…)

11) If you could take part in any one single naval escapade, what would it be and why?

Ah, a hard question. I’d quite like to take part in a daring boat cutting-out expedition, with courageous hand-to-hand fighting and the element of stealth in coming up to the enemy. However after a little thought I’ve chosen the Battle of the Nile, which to my mind was Nelson’s finest hour. And what a sight it must have been – the huge French flagship L’Orient bursting into a violent conflagration that actually stopped the battle for some moments.

12) Your publisher has a slightly mean streak and send you out to do your own PR: you have to stand on a soap box at Kings cross and sell your book to passers buy… whats your pitch?

Live the adventure with the dashing sea captain Thomas Kydd at the controversial Second Battle of Copenhagen in 1807. Did the British commit a ‘war crime’ there? – I’ll let you decide.