Keep reading…. find out how you can win a few copy of this excellent book

Ruth (RS) Downie graduated from university with an English degree and a plan to get married and live happily ever after. She is still working on it. In the meantime she is also the New York Times bestselling author of a mystery series featuring Roman doctor Gaius Petreius Ruso.

Vita Brevis (2016) (The seventh book in the Medicus Investigation series)

Ruso and Tilla’s excitement at arriving in Rome with their new baby daughter is soon dulled by their discovery that the grand facades of polished marble mask an underworld of corrupt landlords and vermin-infested tenements. There are also far too many doctors – some skilled – but others positively dangerous.

Ruso thinks that he has been offered a reputable medical practice only to find that his predecessor, Doctor Kleitos, has fled, leaving a dead man in a barrel on the doorstep and the warning “be careful who you trust.” Distracted by the body and his efforts to help a friend win the hand of a rich young heiress, Ruso makes a grave mistake, causing him to question both his competence and his integrity.

With Ruso’s reputation under threat, he and Tilla must protect their small family from Doctor Kleitos’ debt collectors and find allies in their new home while they track down the vanished doctor and find out the truth about the heiress’ dead father – Ruso’s patient – and the unfortunate man in the barrel.

Not a lot of people know this…

The Roman soldier and the British girl were only ever supposed to fill three chapters for a ‘start a novel’ competition. If someone had told me I was going to end up writing a whole series about them, I’d never have dared to make him a medic.  What did I know about Roman doctors?

There were lots of things I didn’t know back then. It’s probably just as well, because if I’d had the sense to run away I’d never have discovered the fantastic world that Ruso and Tilla live in.

It turned out that there was no shortage of medical textbooks from the ancient world. The challenge was to find the balance between making Ruso an authentic doctor of his time, and making him sound dangerously insane.

There are plenty of useful things he could do: setting broken bones, stitching up wounds and putting dislocated joints back where they ought to be. He could offer a form of cataract surgery, and some of the surgical techniques he would know were still being used in the field hospitals of the First World War. But what if a patient arrived with toothache, and he consulted one of the respected textbooks of his day? He might prescribe the sting of a stingray—because according to Dioscorides, “it shatters the tooth and ejects it.” Which would be very authentic, but I suspect anyone reading the story would spend the next few chapters fingering their jaw, and long after closing the book they’d remember it as “that one with the thing about teeth.”

Luckily there’s plenty of evidence that the doctors of the classical world were a quarrelsome bunch, so Ruso doesn’t have to follow all the advice he’s given. That’s just as well, because otherwise he might be prescribing jellyfish as a cure for gout, plastering on ground-up earthworms to mend severed tendons, and recommending the ash of burned seahorses (mixed with pitch or lard) as a hair-restorer.

Anyone could call themselves a doctor in the second century, so if you needed medical help it was definitely a case of ‘buyer beware’. A wise course, especially if you planned to travel, might be to find someone reliable and ask for a “theriac” to take every day – a general antidote against everything. The problem was—as Ruso discovers in VITA BREVIS—that some of the ingredients were addictive and others were poisonous, so if you changed doctors the next one would need to know exactly what the last one had given you.

As someone who writes about a medic who investigates murders, I find myself delving into all sorts of things like this – things that a normal person might find slightly worrying.  Not all of them end up being useful, though. Even though there is cyanide in apple pips, and it might be theoretically possible to bump somebody off by sneaking lots of pips into their dinner (please don’t try), it probably wouldn’t work in a book. The readers who already knew about apple pips would guess the plot and the ones who didn’t would never believe it.

Incidentally—it’s not a good idea to feed onions to sheep, no matter how keen they are to eat them. Or to any other livestock. Animals have been poisoned by onions.  I know this because there’s a copy of “Poisonous Plants and Fungi: An Illustrated Guide” on the shelf in the writing room. It sits next to “Dreisbach’s Handbook of Poisoning” and the “Human Bone Manual”. Being a writer of historical crime is a strange job. 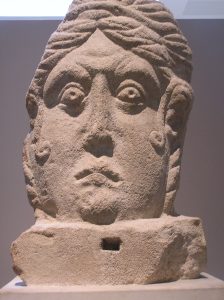 It could be stranger, though: I could be an author of ancient-world werewolf stories. Writing in the first century, Pliny insisted that the idea of men turning into wolves and then back into men again simply wasn’t true. “The extent of Greek gullibility,” he went on to say, “is amazing.” However… this is the same Pliny who quotes sources saying that some men in India are entirely enveloped by their ears, that the Astomi tribe have no mouths and live entirely on air and smells, and that birthmarks, scars and markings can be inherited. Amongst the Dacians, apparently, tattoos have been known to reappear up to the fourth generation. And it seems that almost everyone believed in ghosts, which is why it was important to make sure the dead were properly buried.

I can’t help thinking the Roman world would have loved the Internet.

I try to ration the amount of this sort of thing that goes into the books, otherwise people will think my characters are slightly crackers. But although some of what our ancestors believed is wildly wide of the mark, how well would most of us survive in a world where we couldn’t phone for help or Google the answers? I’m constantly in awe of their energy, their curiosity and their independence.

Finally, a few thoughts from Artemidorus, interpreter of dreams. May you never dream of boxing, which signifies bad luck, but may you dream of having eyebrows that are thick and luxuriant, because this is a dream that is “auspicious for all”.