Saul David: The Prince and the Whitechapel Murders (Review)

(1966 – )
Saul David was born in 1966 and educated at Ampleforth College and Edinburgh and Glasgow Universities. He is the author of several acclaimed history books, including Mutiny at Salerno: An Injustice Exposed (made into a BBC Timewatch documentary), The Indian Mutiny: 1857 (shortlisted for the Westminster Medal for Military Literature) and Zulu: The Heroism and Tragedy of the Zulu War of 1879 (a Waterstone’s Military History Book of the Year). He has presented and appeared in history programmes for all the major channels, including BBC1, BBC2, ITV1, Channel 4 and Five. He lives in Somerset with his wife and three children. 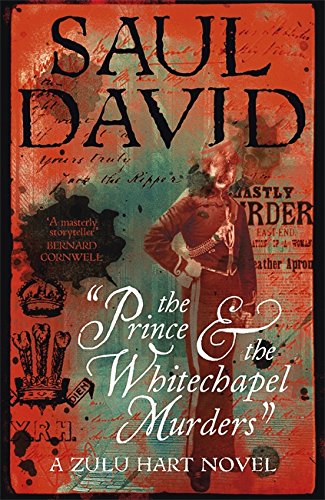 London 1888: George ‘Zulu’ Hart is the mixed-race illegitimate son of a Dublin actress and (he suspects) the Duke of Cambridge, commander-in-chief of the army. George has fought his way through wars in Africa and Afghanistan, won the VC and married his sweetheart, but he’s also a gambler, short of money and in no position to turn down the job of ‘minder’ to Prince Albert Victor, second in line to the throne.
George is to befriend the charming young cavalry officer and keep him out of trouble – no easy task, given that the Prince is a known target for Irish nationalist assassins, while his secret sexual orientation leaves him open to blackmail and scandal.
To make matters worse, the Prince is also in the habit of heading out late at night to sample the dubious pleasures of the East End.
Both outsiders in their different ways, perhaps the two men have more in common than they know, but when a series of horrible murders begins in Whitechapel, on just the nights the Prince has been there, George is drawn into an investigation which forces him to confront the unthinkable…
A brilliant standalone adventure based on detailed research, this is a thrilling novel of suspense and a fascinating new twist on the Jack the Ripper story.

I cannot believe its been 10 years since Zulu Hart was released, a book that i highly enjoyed along with its follow up Hart of Empire, Saul David brought alive the character of George Hart, the history of the time and the depth of history in each of those books, as an author he truly brought those books to life.

The Prince and the Whitechapel Murders was a wonderful surprise after a 6 year break from George Harts adventurous life, a long awaited next on the series. Its has been sometime since the last fictional novel from Saul David and i felt it in the start of this book, unlike the previous two books this one didn’t capture me immediately, or at least it wasn’t George who did, as with other books the realism of the authors portrayal of the period did, it was my previous attachment to the character that kept me totally involved and interested in him. However it didn’t take long for the author to bring George back to life, particularly with the intrigue around his past.

What follows next is a well crafted crime novel full of intrigue and misdirection, set in a period where great squalor and hardship exists, an environment where the weak can be preyed upon, an environment where Jack the Ripper roams. While George is tasked with protecting Prince Albert Victor from Fenian terrorists, he also gets drawn into the investigation for one of the most notorious killers in British history. Saul David doesn’t just then take the reader on a fanciful ride, we are treated to an accurate and plausible account of the investigation of who the ripper may have been. In doing so i defy anyone to not be hooked by the plot and enamored with the characters.

During the book the author also drops many little Easter eggs from Georges past, the gap in time that exists between Hart of Empire and this book, all of which could be potential stand alone novels or novellas, i hope this means we will see much much more of Georges past and his future, and i also hope that we don’t have to wait another six years for it because Saul David has a talent for creating the most fantastic scenery for his characters to grow into.