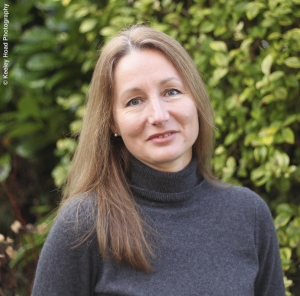 SD Sykes lives in Kent with her family and various animals. She has done everything from professional dog-walking to co-founding her own successful business. She is a graduate from Manchester University and has an MA in Writing from Sheffield Hallam. She attended the novel writing course at literary agents Curtis Brown where she was inspired to finish her first novel. She has also written for radio and has developed screenplays with Arts Council funding.

Published by Hodder & Stoughton in hardback 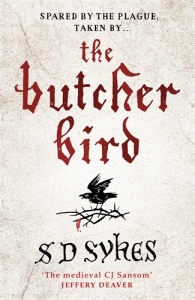 Oswald de Lacy is growing up fast in his new position as Lord of Somershill Manor. The Black Death changed many things, and just as it took away his father and elder brothers, leaving Oswald to be recalled from the monastery where he expected to spend his life, so it has taken many of his villagers and servants. However, there is still the same amount of work to be done in the farms and fields, and the few people left to do it think they should be paid more – something the King himself has forbidden.

Just as anger begins to spread, the story of the Butcher Bird takes flight. People claim to have witnessed a huge creature in the skies. A new-born baby is found impaled on a thorn bush. And then more children disappear.

Convinced the bird is just a superstitious rumour, Oswald must discover what is really happening. He can expect no help from his snobbish mother and his scheming sister Clemence, who is determined to protect her own child, but happy to neglect her step-daughters.

From the plague-ruined villages of Kent to the thief-infested streets of London and the luxurious bedchamber of a bewitching lady, Oswald’s journey is full of danger, dark intrigue and shocking revelations.

This is book two in this series, and always an interesting prospect for any author, but especially a new author. Book one Plague land was reviewed here and if i’m 100% honest is pretty much on a par with book one. Once again the author offers a charismatic portrayal of the time period, and wraps the warp and weft of the crime thriller around the complex dark and atmospheric local climate of the period.

SD Sykes Characters are once again the clear winner in this story, breathing life into a story that may not have held my attention as well as it did without their truly lifelike portrayal. SD Sykes is one of those writers who can give you you the smell of the place along with the description, you take in all the detail the author gives you and your brain fills in the sensory gaps giving an immersive portrayal of the time. Probably the best section of the book is when Oswald journeys across the bleak English landscape of post plague England to London, but a London very different to the one we know, a city of migrants, of people escaping the hinterlands of England and the plague destroyed villages.

So once again, a thumbs up, recommend this book , and the series… you don’t get characters like this every day, so go read them…. i do however hope book 3 gives a little more complexity to the twists and turns. (but that could also be because i’m a jaded old book reviewer who reads too much)

SD Sykes lives in Kent with her family and various animals. She has done everything from professional dog-walking to co-founding her own successful business. She is a graduate from Manchester University and has an MA in Writing from Sheffield Hallam. She attended the novel writing course at literary agents Curtis Brown where she was inspired to finish her first novel. She has also written for radio and has developed screenplays with Arts Council funding. 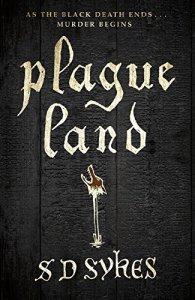 Oswald de Lacy was never meant to be the Lord of Somerhill Manor. Despatched to a monastery at the age of seven, sent back at seventeen when his father and two older brothers are killed by thePlague, Oswald has no experience of running an estate.

He finds the years of pestilence and neglect have changed the old place dramatically, not to mention the attitude of the surviving peasants.

Yet some things never change. Oswald’s mother remains the powerful matriarch of the family, and his sister Clemence simmers in the background, dangerous and unmarried.

Before he can do anything, Oswald is confronted by the shocking death of a young woman, Alison Starvecrow. The ambitious village priest claims that Alison was killed by a band of demonic dog-headed men. Oswald is certain this is nonsense, but proving it – by finding the real murderer – is quite a different matter.

Every step he takes seems to lead Oswald deeper into a dark maze of political intrigue, family secrets and violent strife.

And then the body of another girl is found.

SD Sykes brilliantly evokes the landscape and people of medieval Kent in this thrillingly suspenseful debut.

Even as i write this book im still not 100% sure how i feel about it. The author is clearly talented, the descriptions of post Black Death England (1350) is bleak, filled with the tension of communities at the time, the loss the chaos and the vacuum left behind by so many deaths. The story told from the perspective of Oswald de Lacy , a young man thrust into the forefront of his family, the new Lord of Somerhill Manor, a youngest son never expected to inherit, and destined for the clergy, in fact recalled from his monastery to take the reins.

On returning he struggles with running the estate, an estate that is slowly descending into superstitious bedlam, led there by the local priest Cornwall. Oswald is dragged from his closeted existence worrying about the estate to view a murder, a murder that he is led to investigate and leads him deeper and deeper into the lives of the villagers, the superstitions of the people and the secrets accumulated by the families all twisted into this plot. I’m not going to sugar coat it, some of the mysteries don’t take a genius, but at the same time there are parts that keep you guessing. Like another book i read recently The Royalist the plot isn’t the winner in this book its the characters the descriptive and the language of the time period.

I certainly think you should read this book and decide for yourself, because someone i trust very highly with book recommends Kate gives it a very high recommend,  i may even read it again to see if my mood was off or it landed wrong on the day. Either way the book is a descriptive treat and a time capsule on a part of history where few dare to tread, for a debut its very well executed.