Jasper Kent was born in Worcestershire, England in 1968. He attended King Edward’s School, Birmingham and went on to study Natural Sciences at Trinity Hall, Cambridge, specialising in physics.

Jasper has spent almost twenty years working as a software engineer in the UK and in Europe, whilst also working on writing both fiction and music. In that time, he has produced the novels Twelve, Thirteen Years Later, Yours Etc., Mr Sunday and Sifr, as well as co-writing several musicals, including The Promised Land and Remember! Remember! 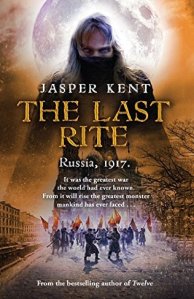 History records that the great voordalak – known across Europe as Dracula – perished in 1893 beneath the ramparts of his own castle, deep in the mountains of Wallachia. In Russia, the Romanov tsars are free of the curse that has plagued their blood for two centuries.

But two decades later and Tsar Nicholas II faces a new threat – a threat from his own people. War has brought Russia to her knees and the people are hungry for change. Revolution is in the air.

Mihail Konstantinovich Danilov – who himself carries Romanov blood – welcomes the prospect of a new regime. Like his ancestors he once fought to save the Romanovs from the threat that Zmyeevich brought them. Fought and won. But now he sees no future for a Russia ruled by a tyrant. He is joined in the struggle by his uncle, Dmitry Alekseevich – a creature born in a different era, over a century before. For more than half his existence he has been a vampire, and yet he still harbours one very human desire; that his country should be free.

But the curse that infects the blood of the Romanovs cannot be so easily forgotten and Mihail soon discovers that it – that he – may become the means by which a terror once thought eradicated might be resurrected . . .

The series so far has been thoroughly dark and entertaining, I had high hopes for the grand finale and what ever Jasper Kent had in store for us, as with the other four books in the series he did not disappoint.

Set during the Russian Revolution a period of dark change, intrigue, betrayal and want in a nation thoroughly torn by the rise of the Bolsheviks and the decline of the Tsarist empire. Jasper Kent continues in the same vein as the rest of the series and concentrates his story and his view on the immediate, those things that impact the everyday man rather than the momentous events of history, this I know has been a point of concern with some readers, but it works for me, the immediacy it creates is worth the loss of the wider history.

The central character of  Mihal Danilov, a man who has lived a life dedicated to the eradication of all vampire kind gives a fatalistic, very Russian outlook on his country  and his role in life. Sometimes that fatalistic view drags on the pace of the plot but the counter POV (which you will have to read the book to find out whom…or i fear i will give spoilers) provides the perfect foil and opposing view to drive the reader forward to an unexpected and thrilling conclusion.

By creating a mix of well researched Russian historical fiction with the authors own take on the  Vampire culture Jasper Kent has created something unique, and thoroughly enjoyable!