Alex Scarrow used to be a rock guitarist.

After ten years in various unsuccessful bands, he ended up working in the computer games industry as a lead games designer.

He is also the author of the bestselling TIMERIDERS series published by Puffin, which has been sold into over 30 foreign territories.

TIMERIDERS was a RedHouse Awards, Catalyst Awards, Hampshire Book winner and a finalist for Galaxy Children’s Book of the Year.

Alex lives in in Norwich with his family. In his spare time he snowboards, sails, writes music and walks his yappy jack russell, Max. He is also very active on twitter and Facebook.

Alex is represented by Veronique Baxter at David Higham Associates 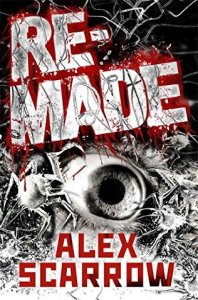 Leon and his younger sister, Grace, have recently moved to London from New York and are struggling to settle into their new school when rumours of an unidentified virus in Africa begin to fill the news. Within a week the virus hits London. The siblings witness people turning to liquid before their eyes, and they run for their lives. A month after touching Earth’s atmosphere the virus has assimilated the world’s biomass.

But the virus isn’t their only enemy, and survival is just the first step . . .

Re-Made the new title from Alex Scarrow, I for one have been looking forward to the next new book from this author. Not that i have not thoroughly enjoyed his fabulous TimeRiders series. But I’m a huge fan of his adult thrillers, so when I learned that this latest book would be the start of a new Young Adult series i didn’t know if i was disappointed or pleased. Alex Scarrow clearly has an affinity for writing Young Adult fiction so its not like its not going to be an excellent series, but would it work for both Adult and YA markets?

I was very intrigued with the concept of Re-Made, an extraterrestrial virus, one so aggressive it turns people to soup in hours. But the virus is so much more than that. Told around the attempted survival of one family trying to travel to a safety zone, to survive. We follow Leon and Grace and their mother as they encounter various stages of the virus, avoiding its attempts to take over the planet. The inevitable touch points with other survivors is where Alex can introduce his observations on society and its inevitable melt down in the face of adversity. This element of the book is very reminiscent of his Last Light series.

As ever Alex excels at his characters, these alone will keep the reader hooked, i do feel that the younger kids may have a few disturbed nights with this plot, but that’s the idea isn’t it?

For a first book in a series i think he does an excellent job of building the plot and dialing up the tension of the viruses planet wide assimilation and knowing Alex’s books some of the seemingly innocuous elements will come back later and turn out to be highly important, the end of the book is as ever where it gets really interesting, left on the edge of a cliff ready for book 2, as to be expected from this author.

I’m not sold on the book being an adult thriller, i felt that too many elements are toned down to meet the YA market, if he were to really write a grown up version of this then he could cause some very sleepless nights. But i know many teens (and some pre teens) who will love this, it very much has the appeal for the gamers who love the apocalyptic plot lines and the drive for survival.

Knowing the huge hit Timeriders was with the kids i have no doubt that this book will go down a storm as well, spreading among the YA population like a Re-made virus….

I’m looking forward to what happens next.