London, 1944. Britain’s capital is back in the firing line. It has been several years since the Blitz ended, but now death is dropping from the skies once more. Has the tide of war turned again?

Anna Cooper survived the Blitz but she lost her mother and the people closest to her. Amid the flames and rubble, she discovered that everything she thought she knew about her family was a lie. She learned that nobody was prepared to take an orphaned girl seriously and she decided to fight back.

Now, Anna flies warplanes for the Air Transport Auxiliary but she knows it is not enough. Hitler is ready to unleash one final terrifying secret weapon, against which there is no defence. But Anna won’t let that happen. If there is no defence, there is only one option: attack. 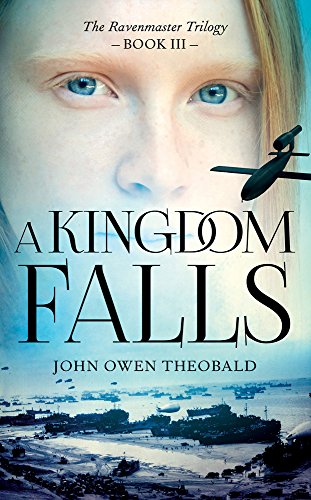 We float in silence through the night. It is the silence of the abyss.

Twenty men sit facing each other across the narrow fuselage. I turn my head away to the porthole. At first it’s an enormous wall of black, but I can just make out shapes in the light of the moon: other gliders headed to other targets, also crowded with soldiers and vehicles.

I look back at the men inside – decent blokes, most of them. D-Company, first boots on the ground. The thought hits me like a brick: Timothy Squire, one of the first soldiers in the greatest invasion ever attempted. Only a year ago, I was working as a builder down at the docks.

A voice rises up, as Bishop, one of the younger soldiers, tries a Cockney tune to mask the fear.

I don’t want to be a soldier,

I’d rather hang around

Some of the lads join in, but swiftly fall silent, and again we are soundless men, stuffed in a glider with a jeep and two anti-tank guns.

With shaking hands, I ease the buckles strapping me in. No matter what happens, I will not be belted in here to drown or burn.

I glance over at Arthur Lightwood, the other sapper and my best mate through all this, ready to make a joke, but his eyes are squeezed shut. It barely looks like him, under a camouflage helmet, his face black with stove soot. I must look the same. Not as ugly, of course.

I can’t worry about us being shot down. Just do my bit. We will land ahead of the armies, find the bridge, and disarm the bombs. I’m a sapper, I can disarm a bomb. That’s all. Then we hold the bridge until the reinforcements arrive.

A man couldn’t ask for better reinforcements. In a few hours a whole continent of British and American troops will be crossing the sea, tens of thousands of trained soldiers. The greatest bloody cavalry you could ask for.

I look back at the window. I’ve got to see something, otherwise this rolling will have me sicking up in my helmet. Clouds hide the stars, I can see only the haze of the full moon.

‘All right!’ Major Roland’s voice blasts into the stillness.

The glider is ready to be cut loose and there is no going back. A powerless glider falling to the earth. The well-defended earth.

I think again of ‘Rommel’s asparagus’ – great sharp poles erected against glider landings. Major Roland had no bright ideas about avoiding these. We’ll try not to land on them. My heart throbs in my chest.

My mind flees to happy, easy, warm thoughts. Anna Cooper on Tower Green, the ravens croaking on the battlements, Dad dusting off his beloved suits of armour. The earth unmoving under my feet.

With a great heave we are cut loose. I count – six heartbeats before gravity rushes in. Seconds have never passed so slowly. My stomach drops to my feet, but I keep my eyes on the porthole.

I can only see a broad shape, dark against the darkness, but I know what it is: the great bomber that towed us here is heading back. There goes Cecil Rafferty, swanning off back to England. Back home. His job is done, ours is about to begin.

Once Rafferty’s plane has vanished, my shoulders sag with relief.

I told him to watch out for Anna, to make sure she is safe from her father, that sneaky German who’s turned up in her life in the middle of a bleeding war. We shook hands on it, Cecil Rafferty and I.

She’ll be safe, I know. Relief is followed by the suffocating thought that I will never see her again.

Forward motion jolts my head down. The pressure builds in my ears, pushing against my skull. We are falling, fast. No time to spare a thought for Anna or Cecil Rafferty. The dive builds, our speed growing, as we plummet into the howling darkness.

And the abyss swallows us whole.