Stephen Deas is an engineer in the aerospace industry, working on communications and imaging technology in the defence sector. He is married with two children and lives near Writtle in Essex. 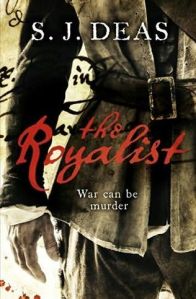 William Falkland is a dead man.

A Royalist dragoon who fought against Parliament, he is currently awaiting execution at Newgate prison. Yet when he is led away from Newgate with a sack over his head, it is not the gallows to which they take him, but to Oliver Cromwell himself.

Cromwell has heard of Falkland’s reputation as an investigator and now more than ever he needs a man of conscience. His New Model Army are wintering in Devon but mysterious deaths are sweeping the camp and, in return for his freedom, Falkland is despatched to uncover the truth.

With few friends and a slew of enemies, Falkland soon learns there is a dark demon at work, one who won’t go down without a fight. But how can he protect the troops from such a monster and, more importantly, will he be able to protect himself?

The Royalist is a historical mystery, but for me that is almost incidental to the reading of the book, i’m sure for some it may be detrimental, but the real talent of this book is something that the author excels at, in his Guise as Stephen Deas and Nathan Hawke.

Just like the Gallow series the author takes us on a tour of the darker side of war, rather than the Fog of war we get the Grime of War, all the much and horror, the cold and disease that many leave out of a tale. The tale its self is told (narrated) by William Falkland, a Royalist in the enemy camp, recruited by non other than Cromwell himself, taken from the hangman’s noose, to investigate a spate of suicides in his newly formed and trained New Model army, the hope of the parliamentary cause. There are no rose-tinted glasses in this tale, and for me that’s its brilliance, war isn’t pretty it isn’t clean and it doesn’t have absolutes its all shades of dirty grey. Why would a royalist agree to do this? well why would any man want to live? In the winter of the Civil War just existing and surviving is damn hard, let alone in the midst of a nation riven by war.

I take my hat off to the author for his ability and desire to portray all of this horror and dirt, but i echo my friend Kate in my view that the scale of the detail took from the mystery, but i honestly don’t know how you can give that much detail and darkness without consuming the attention of the reader from other parts of the tale.

Michael lives in Hampshire with his wife and young son. His childhood holidays were spent visiting castles and battlefields, but his fascination with the civil wars was piqued partly by the fact that his hometown and region of Hampshire are steeped in Civil War history. 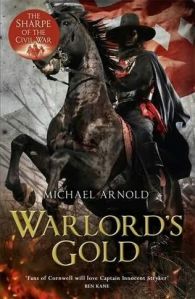 Autumn,1643. As an increasingly bitter war rages across England, Captain Innocent Stryker leaves Oxford with orders to recover a lost treasure, vital to the success of the Royalist cause. But a seemingly simple mission to the remote Scilly Isles is soon jeopardised, for enemies lie in wait. A formidable Parliamentarian agent has been sent ahead of Stryker’s force, intent on defeating Royalist plans. Feared by ally and enemy alike, he is a man whose determination is only matched by his hatred for Stryker.

The quest for the gold takes Stryker across storm-ravaged seas, through enemy territory and finally to the Royalist stronghold of Basing House. And it is there that Stryker will face his most dangerous challenge yet.

Reading Innocent Stryker is always a pleasure, I’m not even going to try and lead up to is this book any good, It is, its Bloody good. I had one more day left on my holiday, i got up took the little one to nursery, came home made a cuppa and sat in my sunny conservatory. The next eight hours were a trip back in time, a dark revenge fueled mission for a man from Strykers past. Can Stryker survive the violent world of Civil War England? will his past catch up and kill him? will his weaknesses and hidden compassion’s cause his ruination.

From dark Scilly isles shrouded in storm and misery, through to the wild rides and action of Basing House, a story jammed with every type of action and emotion, the book is a truly exhausting roller-coaster of emotion and action.

There are very few authors and subjects I can read for 464 pages and Michael Arnold is very much one of them, When you get an writer with the skill and ability to blend sublime and realistic characterization with superbly researched plot and that fictional flair to make the story race along and fire the imagination, that’s when you have a winner and a book and writer that not only should be on the best seller list, but very much has earned the right to be there.

This book as you might have guessed will be competing come December for the Parmenionbooks book of the year, what ever happens its easily going to be Top 5.

I don’t think i need to say anything else, because if you’re not convinced to buy this by now you never will be… go buy it and read for your self.