Ian Ross: War at the Edge of the World (Twilight of Empire) Review

Ian Ross has been researching and writing about the later Roman world and its army for over a decade. He spent a year in Italy teaching English, but now lives in Bath. 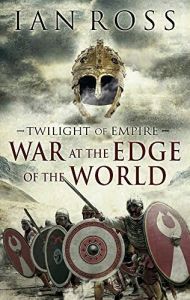 The epic first instalment in a sequence of novels set at the end of the Roman Empire, during the reign of the Emperor Constantine.

Centurion Aurelius Castus – once a soldier in the elite legions of the Danube – believes his glory days are over, as he finds himself in the cold, grey wastes of northern Britain, battling to protect an empire in decline.

When the king of the Picts dies in mysterious circumstances, Castus is selected to guard the Roman envoy sent to negotiate with the barbarians beyond Hadrian’s Wall. Here he will face the supreme challenge of command, in a mission riven with bloodshed and treachery, that tests his honour to the limit. As he struggles to avert disaster and keep his promise to a woman he has sworn to protect, Castus discovers that nothing about this doomed enterprise was ever what it seemed.

Ian Ross and Twilight of Empire: War at the edge of the World has all the hallmarks of the next great Roman series. The author has chosen a period that few have written in, a time when Rome and its empire is very different to the one we see portrayed in films and the HBO TV series, gone is the segmented armour, the Scutum etc, in its place, Mail or scale armour oval shields and these guys wore tunics and breeches, a clear sign of the blending of other nations into the empire . It was a time when the Empire was so large its power and leadership was shared, its politics even murkier. The book follows the exploits of Centurion Aurelius Castus, his journey north into the lands of the Picts, the inevitable betrayals, escape and eventual revenge.

The book is delivered in an interesting style, i would suspect that the author is very well read in the genre, or by some quirk of writing styles he has endeavored to produce the depth of detail and narrative of Ben Kane, the action and pace of SJA Turney and a main character that has the depth and personality of Simon Scarrows Macro (that’s not an Insult, i think Macro is very multi faceted). Castus is a non nonsense hard fighting centurion, a man who looks out for his men, he is also a man with a tactical brain, very much like Macro. Add in Nigrinus the notary (who takes the place of Narcissus) and you can see the comparison… but don’t be swayed by it, this is only a facet of the characters and plot, Ian Ross brings plenty of originality.

The Journey of  Centurion Aurelius Castus is a refreshing change for the Roman fiction genre, across a very much changed Romano Britain landscape, the power of the empire has dimmed at its edges, but thinking its failed is a mistake the Picts will rue.  In the same way that the conquest of Britain was for politician ends rather than expansion, this political backwater of the empire is once again at the forefront of a changing an empire, Instead of Claudius solidifying his hold on power, we are to witness the rise of Constantine, a name to shape an empire. In many ways this book feels like a taste of what’s to come from a clearly talented author.

I hope to follow more of the journeys and battles of Centurion Aurelius Castus, and also the rise of Constantine.

Highly recommend this one

After the longest undergraduate degree on record (1980-87), he joined the United States Navy, where he served as an intelligence officer and as a backseater in S-3 Vikings in the First Gulf War, in Somalia, and elsewhere. After a dozen years of service, he became a full time writer in 2000. He lives in Toronto (that’s Ontario, in Canada) with his wife Sarah and their daughter Beatrice, currently age seven. He attends the University of Toronto when the gods move him and may eventually have a Masters in Classics, but right now he’s a full time historical novelist, and it is the best job in the world.

Christian is a dedicated reenactor and you can follow some of his recreated projects on the Agora. He’s always recruiting, so if you’d like to try the ancient world, the medieval world, or the late 18th century, follow the Link to contact him.

THE RED KNIGHT was one of the most acclaimed fantasy debuts of 2012 – and now he rides again. Prepare for one epic battle . . .

Betrayal, on the other hand, is free

When the Emperor is taken hostage, the Red Knight and his men find their services in high demand – and themselves surrounded by enemies. The country is in revolt, the capital city is besieged and any victory will be hard won. But The Red Knight has a plan.

The question is, can he negotiate the political, magical, real and romantic battlefields at the same time – especially when intends to be victorious on them all?

This is a book that has taken me longer than any other to read this year so far, not because its a bad book, very much the opposite. This book contains some of the most involved, imaginative and impressive world building i have seen, right up there with the depth and passion of lords of the rings.

This is book two in the series following on directly from the fabulous debut that was the Red Knight, once again following the mercenary band headed by the Red Knight, the Captain. A man who is both a fighting Knight at the peak of his prowess, but also a magister (a sorcerer) very powerful and growing in skill all the time. Unlike many books we don’t just live the story from the point of view of the hero (the Red Knight) we get a Multi POV, we see the opinion and perspective of all, and as such get to see what the individual see’s, themselves a hero, or in the right. This multi POV is very encompassing, so  much so that there are times it becomes hard to keep all the threads and all the names straight, hence the length of time needed to read the book.

The world of the Red Knight is HUGE, made more so by the depth of detail, history and politics. This world encompasses much of the real world just with a twist. Outwallers that are native Americans for example, countries that resemble Canada, Great Britain, France, an empire that bears a striking resemblance to a decaying Byzantine empire, the fantastic Nordikans, who more than resemble the Varangian guard. All of these people and places imbued with the authors rich depth of historical knowledge. Miles Cameron being the highly renowned Historical Author Christian Cameron, a writer who imbues all of his work with not just literary research, but with physical research, hours spent in armour and training with weapons. Walking the wilds of Canada wearing the garb of a true knight, all of this detail is powered into his books to stunning effect.

Does Fell sword bring a better book with more satisfaction than Red Knight? yes and no, i found the ending more satisfying than Red Knight, but i think that may be because Red Knight had so much hard work to do with regard to world building, it was only the latter quarter of book one that truly showed the excellence of his writing talent. Fell Sword was a much more immersive encompassing tale, one that carries the reader into the depth of the wilds to learn more of the creatures who dwell there, more of Thorn and what drives him, or more importantly who. Most important of all it takes the reader into the depths of the politics of the world, a truly dark murky, back stabbing politics, politics fueled by ambition and magic. Most interesting is that Fell Sword reveals the true darkness from the wild, we now know what is coming, we just don’t really know why. Its exactly what a middle book should be, if not more, many middle books are a pause, this is anything but. Next year 2015 will see the third book in the series The Tournament of Fools, i highly recommend getting a Pre-Order in, i feel its going to sell fast.

Other books by this author