Simon Scarrow is a Sunday Times No. 1 bestselling author. His bestsellers include his novels featuring Roman soldiers Macro and Cato, most recently THE BLOOD CROWS, PRAETORIAN and THE LEGION, as well as SWORD AND SCIMITAR, about the 1565 Siege of Malta, and four novels about the lives of the Duke of Wellington and Napoleon Bonaparte. He is the author with T. J. Andrews of the bestselling ARENA, introducing the gladiator hero Pavo, and the new ebook novella series INVADER.

His latest novel is the 13th Cato and Macro adventure, BROTHERS IN BLOOD.

Buy a special collectors Edition of the book

A novel by Simon Scarrow

The Roman Empire’s conquest of Britannia is under threat from within. Prefect Cato and Centurion Macro must uncover a traitor to prevent unthinkable defeat.

A messenger on the streets of Rome has been intercepted and tortured, revealing a plot to sabotage the Roman army’s campaign against Caratacus, commander of Britannia’s native tribes. A treacherous agent’s mission is to open a second front of attack against them and eliminate the two Roman soldiers who could stand in the way.

Unwarned, Cato and Macro are with the Roman army pursuing Caratacus and his men through the mountains of Britannia. Defeating Caratacus finally seems within their grasp. But the plot against the two heroes threatens not only their military goals but also their lives.

I always like my reviews to be upfront and honest, so just for sake of clarity: I have been a fan of Simon Scarrow’s books since his first book 14 years ago. I have been lucky enough to consider Simon a friend and have (Centurion) Parmenion appear as a character in two of the Cato series (Eagle in the Sand and Centurion), that however should no way colour my review, each book on its merit.  As a fan of the series i had started to experience some concern with the Cato series around book 9 (Gladiator), I wasn’t a fan of the introduction of Julia as a character, she works well as a device in the background, a way to improve Cato’s position in Roman Society, but as a participant i always felt she diluted the plot, as such i have enjoyed her not being in the book. (sorry Simon)

I very much enjoyed book 12 and the introduction of the Blood Crows, a return to Britannia and a return to Macro and Cato being soldiers, working with their men within the twisted politics of the Roman world and army. Brothers in Blood is another continuation of that return to classic Macro and Cato. Our dynamic duo set to capture Caratacus, dangerous battles to be fought, The spies of Pallas to contend with and the ever present political shenanigans of the Roman army, the petty politics of the cursus honorum driving the behavior of so many of their peers.  As ever Simon manages to weave a splendid web of intrigue, making us guess at every turn who the Pallas may have put in their path, i like to think that knowing Simon and his books so well is why i guessed right, i think the reveal will come as a surprise to most. All in all the plot for this book is very well constructed, throwing plenty in the path of Macro and Cato, but always something the average good solider could deal with, there is no “Super Hero” here. Simons skill with this series is the down to earth soldier.

I do feel though that there is a lacking still in the books, we know Macro and Cato cannot die, they never really even suffer an injury to severe.  This is to be expected, many authors protect their Heroes,  But there are no characters surrounding them that grow with them, that you come to invest in and hope for survival, I have come to call all the supporting cast “Red Shirts” because like on a star trek mission you know they are going to get it, they are the cannon fodder, and to be honest, who really cares about them, we know nothing about them and have not grown with them or experienced their pain.  I feel with the introduction of the Blood Crows there is room to develop some supporting cast, some friends for both of the men. Macro and Cato are now set slightly apart in rank, so we could see the development of friendships in their own peer groups. A man who excels at this is Anthony Riches, there is a rich cast of many, and with every book he delights in keeping the reader on tenterhooks as to whom out of the cohort of friends he might kill. Its this that adds an extra depth and element of suspense and drama that is missing at the moment (at least for me) in the Cato books.

That aside this is a splendid 4/5 for me, i enjoyed it and look forward to the next book, Britannia gives Simon a very rich tapestry for Macro and Cato to explore with minimal interjection from the devious politics of Rome. There are so many more fights to come before they need to get back embroiled with Rome…and what will eventually be the Year of the four Emperors.

Novels
The Sword and the Scimitar (2012)

Writing Historical Fiction and Fantasy By Miles and Christian Cameron

By Miles and Christian Cameron 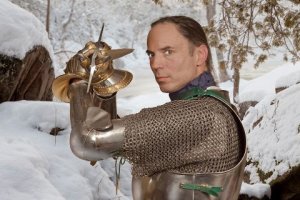 Writing Historical Fiction and Fantasy: It’s something I’m asked all the time since I admitted to being Miles and Christian too–which is harder?

I hope I won’t appall you by saying that they are basically the same.  Heretical, I know.  I’ve been very interested in a conversation among my friends and some other authors online–I’ve discovered that most HisFic readers don’t read Fantasy, and most Fantasy readers don’t read HIsFic. Interesting.  I’d like to suggest to both groups that you try dabbling in the other, and I’ve tossed out the names of some of my favorites in this blog to give each group a place to start. Er–after you read all my books…

Anyway, I read both.  I love them both.  If I didn’t have to spend my waking hours reading history (right now its essays on the education of boys and girls in the early Renaissance) I’d read Ben Kane and SJA Turney and Anthony Riches–AND CJ Cherryh and Michael Scott Rohan and Scott Lynch.  I’d read them all, all day.  In between bouts of fighting in armour.

Anyway, here’s my point.  Historical fiction is, in a way, all fantasy.  The past is another country.  We cannot go there in the real world, and when we visit it in literature, we acknowledge a suspension of disbelief.  It is virtually impossible for us to understand Greek worship of the gods–or Roman.  It’s too far away.  Ancient Greek clothes?  I honestly think I know as much as anyone on the planet, and I’d kill for one bog-corpse in a 6th c. BCE chiton.  Want to start a fight at an academic party among people who study Classics?  Ask someone either 1) how a phalanx worked, or 2) what Socrates meant when he said almost anything.  So when I write that period (which I hear I do with some authority) I’m, in fact, creating a whole world.  It’s informed by hundreds of hours of serious research–but I won’t pretend I know.  NO ONE KNOWS.  Hell, we don’t even know if Alexander was a great general.  The first serious description of him was written down hundreds of years after he died.  And 50 BCE is as far removed from 300 BCE as 2015 AD is from 1765 AD…

But even more entertaining–all Fantasy is history.  (Out there somewhere, one of my friends is throwing my comments across the room).  But–it is.  No one–really–can write about anything but what they have experienced.  History–the written record of human experience–is just that, the sum total of all our stories.  I have never read a fantasy novel that didn’t owe virtually all its culture to history.  Tolkien?  Slam dunk.  Guy Gavriel Kay?  Obvious.  But even when you get to ‘original’ worlds–if they bother to ‘create’ economics or religion or weapons or armour…  One of my favorite fantasy series is ‘Wizard of Earthsea’ by Ursila LeGuin.  No part of her work is based on one simple history.  It’s not ‘Rome, disguised’ or ‘Greece’ or ‘Egypt.’  And yet every page is, in fact, informed by all those cultures, and the books would be very different if they were written in China…  My university D+D group (yes, friends, I am and was a D+D nerd) used to say we could type a borrowed culture in one weapon.  Curved swords or straight?  Dirk or dagger?  Bronze or iron?

When a fantasy novelist wants to truly understand the culture she’s creating–where can any of us possibly go for data but history?

By the way, I’ve read some awesome books that were purely speculative, about alternative cultures that bear little or no relation to history–on the surface.  Perdido Street Station by the superb China Mieville comes to mind–and yet, virtually every cultural allusion will return you to Victorian London; the whole novel is (to me) grounded in history. (The architecture, for example).

Of course, I’m a fanatical historian.  So I see everything through the lens of history.  But its not a bad lens, and it is the tool I use to focus my writing.  My Red Knight and Fell Sword are NOT set in Arthurian England. They are not set on Earth–even an alternate Earth.  In fact, they have a cosmology and everything–they are set in a multiverse not unlike Michael Morcock’s, because Mr. Morcock (whose work I also admire) was also a fan of medieval hermeticism.  In the Red Knight’s world, there is a Jesus and a Mohamed (at least, people believe in them) for reasons that may or may not be explained–but I know why.

That said, the real reason that many of my characters are Christian is because I wanted to write my skewed re-telling of the Arthurian tales in the same mythos from which they REALLY sprang–the Christian mythos.  It’s a fantastic set of beliefs that are arguably deeper, stranger, and better developed than anything any fantasy writer could invent…
That’s history.  Basically, the best stories ever told.  Our story.
Good reading!