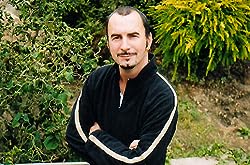 The Immortals  (2015)
(The fifth book in the Hereward series)

1073 – under the merciless sun of the east, a dark force has risen – a Norman adventurer who could rival the feared King William for bloody ambition. He has conquered his land, he has built his fortress and he has amassed his army. And now he has taken Constantinople’s ruler as his prisoner…

It falls to Hereward to rescue this precious captive. For this great English warrior-in-exile and his spear-brothers, it will mean mounting a raid that could prove the most dangerous and deadliest of their lives. Assisting them in their task will be an elite and legendary band of fighters, the Immortals – so-called because they believe they cannot die in battle. But it will not be enough – for enemies hide within the jewelled heart of Byzantium: vipers who spread their poison, who want to see the English dead at any cost and who are to transform a mission that was at best dangerous into an adventure that is now suicidal. . .

With this rousing adventure full of brutal sword play, treachery, camaraderie and honour, James Wilde continues his bestselling account of the action-packed life and times of England’s great and now, thanks to his his fiction, perhaps not-so-forgotten hero – Hereward the Wake.

Book 5 in this excellent series, one  i have enjoyed immensely. Up to now i have been unsure what it was that made this series different, but i think i have it now.

Hereward the Immortals is much more of a departure from the history, that’s not to say that James has not done his research, and doesn’t keep impeccable detail in the Byzantine world, because he does. But book 5 isn’t tied by the History of Hereward, the author gets to make suppositions, to place our hero and his men in the line of some of the greatest history of the time period, embroiled in the bloody decline of the Eastern Roman Empire. This freedom from the history books i believe allows the author to give flight to his fantasy writing skills (and they are many), making the battles dramatic, bloody and fast paced and the characters an extra depth.

This book also see’s the author explore a more emotional Hereward, his men depend on him and he feels every loss, every mistake personally no matter his out of his control. This book pits him against the snakes of Roman Constantinople, a new Norman foe and an old one, we meet the Turk for the first time and through out all the trials the team have one aim, to become members of the Varangian guard.

With excellent prose and characterisation James wiles races us through this highly emotional and action packed journey. I enjoyed every moment and am really looking forward to what comes next.

AKA Mark Chadbourn was raised in the mining communities of South Derbyshire. He studied Economic History at Leeds before becoming a national newspaper journalist. He is the author of several novels, including The Age of Misrule trilogy
Series
Age of Misrule
1. World’s End (1999)
2. Darkest Hour (2000)
3. Always Forever (2001)
The Age of Misrule Omnibus (omnibus) (2006)