Stewart has spent most of his professional life in television. Initially trained as an academic, he was variously a teacher, soldier and copy-writer before joining the BBC, where he worked in documentary features and current affairs, including stints on Panorama and QED.He was Director of Special Projects at TWI and later Head of Production at Octagon CSI. He produced a wide range of innovative programmes from sports magazines like Trans World Sport, Futbol Mundial and Golazo to historical documentaries like Britain at War, Century and Indochine.He has won over thirty international television awards including a BAFTA, Grierson and Peabody, was elected as a Fellow of the Royal Society of Arts and is Visiting Professor at the University of Bedfordshire.The author of several non-fiction books connected to his work in television, his first work of historical fiction, Conquest, set around the pivotal events of 1066 and the life of legendary hero Hereward of Bourne, was published by Penguin in February 2011. Stewart now lives in Somerset with his wife, Lucy and their twin boys, Charlie and Jack. Their home is also the base for Big Ape Media International, the independent media company run by Stewart and Lucy. 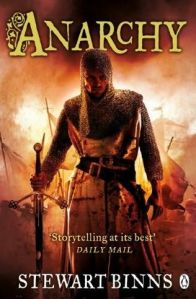 Anarchy is the knuckle-whitening third novel in Stewart Binns’ The Making of Englandseries.

The year is 1186, the thirty-second year of the reign of Henry II.

Gilbert Foliot, Bishop of London, has lived through long Henry’s reign and that of his grandfather, Henry I. He has witnessed the terrifying civil war between Henry II’s mother, the Empress Matilda, and her cousin, Stephen; a time so traumatic it becomes known as the Anarchy.

The greatest letter writer of the 12th Century, Folio gives an intimate account of one of England’s most troubled eras. Central to his account is the life of a knight he first met over fifty years earlier, Harold of Hereford.

Harold’s life is an intriguing microcosm of the times. Born of noble blood and legendary lineage, he is one of the nine founders of the Knights Templar and a survivor of the fearsome battles of the Crusader States in the Holy Land.

Harold is loyal warrior in the cause of the Empress Matilda. On his broad shoulders, Harold carries the legacy of England’s past and its dormant hopes for the future.

It’s such an apt name for the time period of this book, and one I’m ashamed to know little about.

This title by Stewart Binns is something on the surface I should have found fault with, should have picked holes in. There is a certain amount of generality to the people, the nations, the time period. The plot misses so much rich depth that could have been added to the time period.

And yet none of this matters, because the plot powers along at a wonderful pace, the characters are real, humble, flawed and at the same time stylised in such a fashion that it appeals at a different level, (for me). This series has for me been about a journey to find and explore the innate elements that make the British, British. What are the character building blocks that created the stiff upper lip, the boys own childish delight in tinkering, the genius for innovation, the intrepid explorers, and the do or die trying spirit. When you break it down to Celts, Saxons, Danes, Normans etc. Mix all of this into a pot that is the unique landscape and history of the country you get the British.

Harold of Herford is the latest incarnation, the latest ingredient in the mix, and all of it is done with power pace, style and a little I believe humour.

The Historical content, to be honest I didn’t even give it a thought. I’m sure there are many fictional elements in here driving the story against a flat background of real history. But the power and charm of this book is the telling not the facts. I will go an learn more about this period and I expect there to be many differences. At the same time this is more about the mix, the moral and the tale telling. EG: the introduction of Robert of Hode and William of Scarlette. It Should have added an element of farce, but instead added a great little side legend and the development of the Robin Hood legend and its possible tie to the Hereward legend. The whole book was a pleasure to read and I think shows the authors talent in television, how to engage with the audience and carry them on a journey with his cast of characters. This book was devoured in a single sitting and went past so fast it left me missing the people involved and wondering what comes next and how long do I need to wait. (for me a sure sign of a really good read)…and a book can be a damn fine read whilst not being the best book ever.

I have no issue recommending this very Highly as a splendid way to spend the day.

Stewart
Many thanks for taking the time to answer some questions.

1) What was the inspiration behind the series?

Because the 11th/12th centuries were full of great stories, many of them, like the Anarchy, not often told. Also, because the period was the anvil upon which England and Britain was forged, especially through the struggles between the indigenous English and Celts and those nasty Normans!

2) What is more important to you, Historical accuracy or story pace/ plot?

I’m ducking this: both – I love to weave dramatic fiction into real events, but to retain the historical integrity of the events.

3) Was Hereward always your first choice to write as lead, or did you toy / write others?

Always Hereward; I see him as the symbolic embodiment of my answer to 1 above. Thus, the parallel stories of him and his descendants and their relationships with, in turn, the Cerdician, Norman and Plantagenet kings is the central thread of the Making of England quartet. Admittedly, he’s a tenuously contrived symbol, but his story survived (just) the Norman purge, so is a powerful one all the same.

4) Was the need to explore the innate British character a deliberate plot ploy, or something that developed?

Deliberate. It was sparked by the contemporary debate about ‘Englishness’ in the light of the resurgence of Celtic consciousness, which left the English wondering who we are, having lost ourselves in our invention of the ‘British’. As I’m sure is obvious, my view is that much of what we are – especially our political and social proclivities – were born through the synthesis of the English, the Celts and the Normans between 1066 and 1215.

5) Who is your favourite character so far in the series?

6) How far can this go (Richard the Lionheart is next… is he the last?)

He’s the last; a new era beckons. Watch this space.

7) What do you read for enjoyment?

Non-fiction – the next quartet.

8) Who is your favourite author?

9) Sell your series to a new reader in your own words…Why should they buy it?

What else would you want to do during a long, wet English summer?