Adam Croft: What lies Beneath (Review)

Adam Croft is a British author, best known for his standalone psychological thrillers and the Knight and Culverhouse series of crime thrillers.

With more than 1.5 million books sold to date, he is one of the most successful independently published authors in the world.
He’s a USA Today best-selling author, has hit the number one spot in multiple countries, and even briefly knocked J.K. Rowling off the top as most widely read author in the world.

In March 2018, Adam was conferred as an Honorary Doctor of Arts, the highest academic qualification in the UK, by the University of Bedfordshire in recognition of his achievements. Adam presents the regular crime fiction podcast Partners in Crime with fellow bestselling author Robert Daws 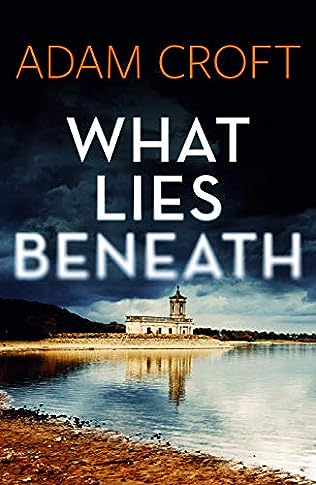 (The first book in the Rutland crime series)

A peaceful Sunday morning in Rutland is shattered when a dead body is discovered on the rocks at Normanton Church.

The victim has been laid out in a crucifixion pose, facing the altar. DI Caroline Hills is certain there’s a religious connection — one which threatens the tranquility of life in the area.

The killer has gone to extraordinary lengths to make the symbolism clear. And the deaths will continue until Caroline and DS Dexter Antoine uncover the truth behind the dark secret — and what lies beneath.

This is not my normal read, normally the crimes i read took place in the ancient past, or on a fantasy world, so this book was a real move to something new for me. What made me pick it up? … Well i have a little shop in the lovely town of Oakham and when talking to my lovely customers about life and hobbies we discovered that i review books and the son of one lovely couple is an author, but more than that, he was writing a crime series based in Rutland. The immediacy of the area intrigued me greatly, how would he turn the picturesque town and county into a murder scene? Add in the cover of the book with the iconic Normanton Church on the cover and i was in.

I have to be utterly honest that while reading the first quarter of the book i really didn’t like the key character, DI Caroline Hills, i was worried that for a reader she just wasn’t engaging me in a positive fashion, and as such i didn’t feel drawn to her situation as a new copper in a new area, she really did come across as the copper from the big smoke who was just a bit to arrogant, thankfully her sidekick DS Dexter Antoine was there to keep me reading, urging him on to prove the boss wrong. What i think i missed initially, is that i believe there is a deliberate ploy to have that dynamic, to integrate Caroline into the sleepier, more community focused lifestyle of Rutland as apposed to London. As someone who grew up in oxford and the surrounding Cotswold’s, but spent many many weekends in London, I can see how the character would appear more rushed, impatient, brash even, because Living in London is a different world by comparison, and people just move faster both physically and in daily interactions, and so they appear brash and rude, more impersonal.

But you do reach a point where something seems to click with DI Caroline Hills, you notice something is wrong, missing from the narrative, she is holding something back, and when it hits you will feel the emotion, the tears will be there for even the hardiest of reader, or maybe that’s me because i’ve been in her situation, wanting to hold a secret so personal to save others from worry.

The main plot driver, hunting for a killer is only part of the overall plot, because we have to get to know the area , the people and the lead character of what will be a fantastic new series. Adam Croft keeps you guessing as long as possible abut who the killer is, with misdirection and plot leads that head off on tangents, tangents mixed into DI Caroline Hills character growth, i have to say i was really impressed with the plot / character development and all the blending that happened. (although i had the murderer pegged right…. but i’ve read too many books 😉

I did also love the way the book is also a tour guide for Rutland, I’ve been here for 18 months owning a shop and learned more about the area in one book than all that time. Its made me want to get out and explore the area more, it answered my own question about Normanton Church and in a truly entertaining fashion, it beautifully portrays a county many have not heard of.

This book for me is the start of Adam Crofts version of Morse, having grown up with Morse being filmed around my youth and even nabbing some extra roles in the TV series as a kid i know it just has the same vibe. And i think it would creatively make a perfect basis for a new TV series.

And locally in Oakham you can also pick up a signed paperback from many of the shops, i know i will have a few on the counter soon