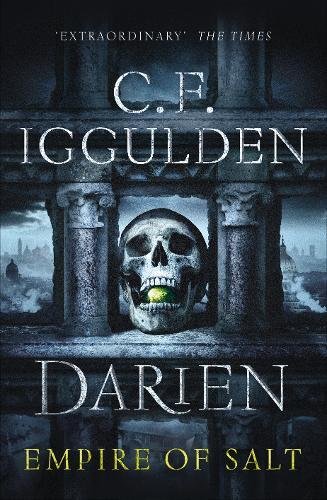 TWELVE FAMILIES. ONE THRONE. WELCOME TO THE EMPIRE OF SALT.

The city of Darien stands at the weary end of a golden age. Twelve families keep order with soldiers and artefacts, with spies and memories, maintaining a peace that shifts and crumbles constantly. The people of the city endure what they cannot change.

Here, amongst old feuds, a plot is hatched to kill a king. It will summon strangers to the city – Elias Post, a hunter; Tellius, an old swordsman banished from his home; Arthur, a boy who cannot speak; Daw Threefold, a chancer and gambler; Vic Deeds, who feels no guilt; and Nancy, a girl whose talent might be the undoing of them all.

Their presence inside the walls as the sun sets will set off a series of explosive events. Before the sun returns, six destinies will have been made – and lost – in Darien.

I feel very fortunate to have been given the chance to read a very advance copy of this book. Conn Iggulden is one of the biggest names in Historical Fiction, i think still the only writer to top the Fiction and Non fiction charts at the same time. So when i found out that Conn Iggulden was going to do a fantasy book i was thrilled, the man is a born storyteller, given free reign to write without the bounds of history was going to be fun to read. Add to this the fact that he has a great passion for my favorite writer David Gemmell, which would without doubt and i think does influence his work, in the way he builds his characters and backgrounds, and the sparse style that says much with minimal words.

Given the above i’m sure you will not be expecting an impartial review? And yet it is,  i went into this book expecting a lot…. a heck of a lot, so failure to deliver would have meant a review to match.

What Conn Iggulden has produced is a book that will be in the running for the Fantasy book of the year, and if its not a shoe in for the Gemmell fantasy Debut next year im not sure what should be! (does it count as a debut if its first in Genre?)

With Darien, Conn has created a world with a hint of Dystopia, is this earth in some far flung future? or is it entirely a construct? that was always the puzzle and challenge with Gemmell. The City of Darien seems to have a very Roman flavour. The corruption, the absolute ruler, the advisory council, the legion. but its only a framework, everything as ever with Conn has so much more wrapped around that, and it all feels very fresh and original.

The Magic of the world is certainly fresh, light touch, some abilities, some items imbued with magic, many from a time past, in a society that has lost the knowledge of its glorious past. The Characters… well its an Iggulden book, the are multi faceted, easy to read and easy to love. The skills they bring, and talents to survive are subtle like so many of the plot twists and turns. You will be hooked before you know it.

This is a truly excellent book, I thought Mark Lawrence had a run away winner for Fantasy book of the year this year, but now we have Darien, and its going to make that choice very difficult.

Darien is one of the best fantasy titles you will read this year, and is another genre Conn Iggulden looks set to dominate.