Lucille Turner: The Sultan, the Vampyr and the Soothsayer (Review)

In her own words:

I was born in Bournemouth in 1964. My first book,Gioconda, which I began in 2007 and finished in 2010, is a novel about the life of Leonardo da Vinci. Although some of Leonardo’s work was familiar to me then, the idea only came to me when I fell upon a print of the Mona Lisa in the aisles of a supermarket one day. One avenue of research led to another, and since then Gioconda has been translated into several languages, winning Spain’s Hislibris prize for historical fiction in 2012.
For the past few years I have been busy writing my second book, The Sultan, the Vampyr and the Soothsayer. I sometimes review other people’s work for Bookmunch, and enjoy being surprised by things I didn’t think I’d like, be it books or new experiences. And of course I love history 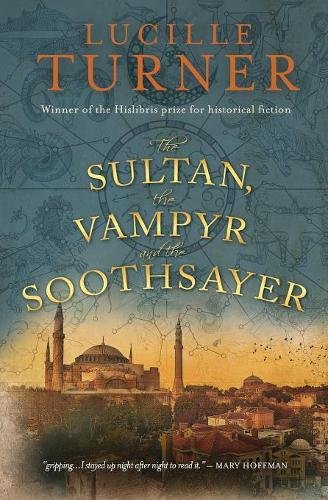 1442: When Vlad Dracula arrives at the court of the Ottoman Sultan Murad II, his life is turned upside down. His father Dracul cannot protect him; he must battle his demons alone. And when the Sultan calls for the services of a soothsayer, even the shrewd teller of fortunes is unprepared for what he learns.
Meanwhile, the Ottoman Turks are advancing through the Balkans with Vienna in their sights and Constantinople, the Orthodox Greek capital, within their grasp. As Eastern Europe struggles against the tide of a Muslim advance it cannot counter, Western Christendom needs only one prize to overthrow its enemies.

This book was a pleasant surprise, the title gives a suggestion of the supernatural with the inclusion of the Vampyr, and the book all the while hints at it, but only in so far as what was perceived to be supernatural in the 1400’s, that’s the beauty of this book. The author takes you on a journey back to the Balkans of 1442, to a time of huge change and turmoil, clashing empires and religions, the end of the old Roman world and the rise of the Ottoman. Lucille Turner covers brilliantly the variances between the court of Vlad Dracul’s father and the court of Sultan Murad giving all the main players a very human face, a persona molded by circumstance and situation as much as personality. She weaves in the political players from all sides of Christianity, the orthodox and the Holy Roman empire, the old pagan Wallachian’s and the many variances between.

Can Dracul and others save the history that lies within Constantinople before its inevitable fall to the Ottomans? Lucille Turners portrayal of Vlad’s time in Murads court goes a long way to show his later personality and enmity with Mehmed II. The book as a whole brings to life a highly evocative view of the turning point of the world and the clashing empires.