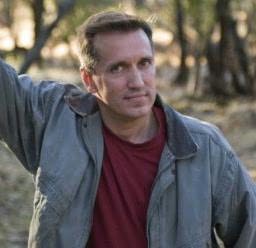 James Rollins was born in Chicago, Illinois, is 1961. With his three brothers and three sisters, he was raised in the Midwest and rural Canada. He graduated with a doctorate in veterinary medicine from the University of Missouri and went on to establish his own veterinary practice in Sacramento, California. An amateur spelunker and a PADI-certified scuba enthusiast, he’ll often be found either underground or underwater.

Who does the U.S. government call upon when a mission requires perfect stealth, execution, and discretion? Meet the newest recruits to the expanding Sigma Force universe–former Army Ranger Tucker Wayne and his stalwart companion, Kane, a military working dog of exceptional abilities — in:

The mission seems simple enough: extract a pharmaceutical magnate from Russian soil, a volatile man who holds the secret to a deadly bioweapon. But nothing is as it appears to be. A conspiracy of world-shattering scope unravels as Tucker and Kane struggle to keep one move ahead of their deadly enemies.

From the frozen steppes of Russia to the sun-blasted mountains of South Africa and Namibia, a biological threat millions of years in the making strikes out at the heart of America. All that stands in the way from a global apocalypse: one man and his dog. But can even Tucker and Kane thwart an ecological menace out of the ancient past to save the world’s future?

Every Rollins is a thriller I look forward too, but when I saw this one I was slightly concerned, the Grant Blackwood link smacked of a James Patterson change of pace. I liked Patterson in the early years, but his “shared books” were always slightly wrong, not quite up to the class of the solo books.

The Kill Switch isn’t the best book i have read by Rollins, but it is a really fun, Interesting and powerful thriller, it still has the Sigma spin and drive. The co-authoring doesn’t diminish the writing, it feels like a Rollins through and through.

This book has an interesting POV style with the switch from Tucker our main character to his partner, a dog, in the form of Kane. The dogs POV could have been a really dodgy gimmick, but it think the authors get the tone just right, smart but still an animal. The plot has plenty of twists and turns and the feel of the co-locations of the book is impeccable. From Russia to South Africa, the author has clearly done his research, i froze in Russia, i cooked in Africa. One of the regular triumphs of a Rollins book is that every side character is complete and one you feel emotinally tied too, from traitors to sub drivers, to the brothers who assist Tucker in Africa all are so well written you could enjoy a book about any of them.

The wild apocalyptic plot as ever has the right amount of plausibility in it to add the fear factor and the “what if” niggling doubt. All in all it is a well rounded fun thriller, one that will delight Rollins fans.