Pierce Brown spent his childhood building forts and setting traps for his cousins in the woods of six states and the deserts of two. Graduating college in 2010, he fancied the idea of continuing his studies at Hogwarts School of Witchcraft and Wizardry. Unfortunately, he doesn’t have a magical bone in his body. So while trying to make it as a writer, he worked as a manager of social media at a startup tech company, toiled as a peon on the Disney lot at ABC Studios, did his time as an NBC page, and gave sleep deprivation a new meaning during his stint as an aide on a U.S. Senate Campaign.
Now he lives in Los Angeles, where he scribbles tales of spaceships, wizards, ghouls, and most things old or bizarre. 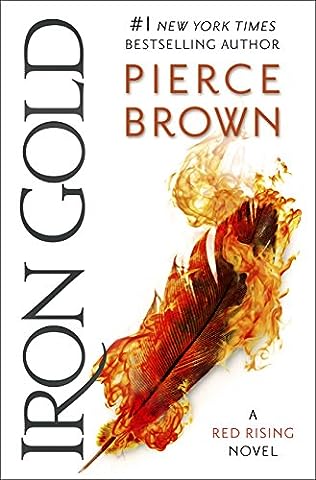 Honor and betrayal fuel a caste-shattering revolution in the action-packed new novel from the number one New York Times best-selling author of the Red Rising Trilogy.

Ten years after the events of Morning Star, Darrow and the Rising are battling the remaining Gold loyalist forces and are closer than ever to abolishing the color-coded caste system of Society for good. But new foes will emerge from the shadows to threaten the imperfect victory Darrow and his friends have earned. Pierce Brown expands the size and scope of his impressive Red Rising universe with new characters, enemies, and conflicts among the stars.

Iron Gold was a much anticipated read, i have been an unashamed advocate for this new series and its excellent predecessor. Pierce Brown has always made life hard for himself, Red Rising was such an extreme and powerful debut that creating a better second book was such a hard ask, yet he smashed it with Golden Son, and once again with Morning Star.

How on earth do you top such a stella series? well apparently you take a leaf right out of the J K Rowling playbook, Harry Potter as a series grew with its audience, it matured, the language grew, the plot became more complex and mature and the subtext became deeper. That’s where Iron Gold takes the story of Darrow, this time with a multi POV expose on what happens when you shatter an empire…. the fall out and the impacts across many walks of life.

Featuring all the surviving key characters from the first series, but 10 years on, 10 years of bloody conflict for the Utopian republic that Darrow dreamed of,  reality is a long way from the hopes and dreams of the young idealist. Has Darrow become all he despised? is the new republic rotten at its core? What machinations abound across the galaxy, There are many golds left alive many grouping around the Ash Lord, can the Golds once more retake power, can the golds within the new empire work with the other colours? and where are the big players, the enemies of Darrow’s past? Golds that powerful may need to run and hide but they are too big to fade from history.

Once again Pierce Brown manages to surpass all my expectations, i thought this would be another all action novel, a full on action packed thrill ride (no bad thing), but whilst there are strong sections of this still and the pace is at times electric, the growth and depth of plot is a huge lift, we see and learn so much more of the empire and its complexity and history. I still hold with my view that i don’t like Sci-Fi, yet this series screams from the gorydamn void to be read, no matter your genre preference.